EDMONTON, AB, June 16, 2022– Fairness Alberta has launched its “Unjust Transition” national public education campaign to help Canadians understand how valuable their energy is not only to Canadian jobs and government revenues, but also to the world.

Russia’s invasion of Ukraine makes the geopolitical energy stakes crystal clear, and rising energy prices are fuelling inflation for Canadian families.  This combination makes it a perfect time to educate Canadians about why the world needs more Canadian energy, not less, and that any transition away from Canadian oil and gas production is not only bad economic and environmental policy, it is also unjust.

“There’s nothing just about Canada transitioning away from its potential energy production when those sales and geopolitical power will immediately be picked up by Russia and Middle East dictators,” said Fairness Alberta Executive Director Dr. Bill Bewick. 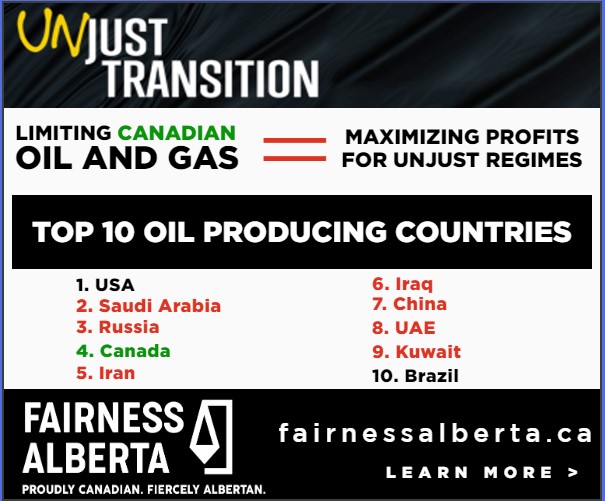 The online ad above in our campaign emphasizes that Canada, the U.S., and Brazil are the only free nations in the global top ten oil producers.  Another ad (see animated version here) emphasizes that Canadian Liquid Natural Gas (LNG) production can not only improve energy security for Europe but can also drive down global GHG emissions by displacing new coal projects, especially in Asia.

“Emissions are global, so the lowered domestic production from Canada’s dramatic GHG regulation and taxation costs us a great deal without making any dent in GHGs. In fact, by failing to increase the production and export of LNG, we’re actually increasing global carbon emissions as Asia builds more coal power plants instead of LNG,” added Dr. Bewick.

A third animated online ad illustrates how China’s plans for new coal plants to meet growing energy demand will generate 150MT of CO2. Those new plants alone will add twice the Co2 our oilsands currently emit.  (China’s current coal use already produces 20 times as much Co2 as the oilsands does).

Bewick observed that, “The whole point of this so-called ‘just transition’ is to reduce emissions, but by shutting in Canadian LNG we’re impoverishing Canada in favour of long-term coal use. When you combine this with Europe’s energy security crisis, it is clearly past time to maximize the responsible use of our national resource bounty, not wish it away”

The initial focus of the “Unjust Transition” campaign is in B.C. and Ontario and will utilize social media as well as digital advertising and traditional media. An initial round of digital ads has already generated 240,000 online impressions in B.C. alone. There is a new section with background on the Fairness Alberta website and Dr. Bewick also published a nationwide column on the campaign: The Unjust Transition: Canada’s energy sacrifice is hurting the world, not helping it.

Here are the links to the four animated online ads: