EDMONTON, AB, May 13, 2021 – Fairness Alberta has released an analysis highlighting how this year’s federal budget allocates a record $20.9 billion to the Equalization program and plans to hike payments to so-called ‘have not’ provinces by 20% over the next four years.

Fairness Alberta Executive Director Dr. Bill Bewick is calling on Canadians in British Columbia and Ontario in particular – who will pay roughly $2,400 per family of four this year into payments for others – to join Albertans in demanding Equalization reform.

“The $20 billion-and-growing price tag for Equalization payments to 30% of the country is not just unaffordable, it is totally unfair and unnecessary given how much the gap between the ‘have’ and ‘have not’ provinces shrunk since 2015,” said Dr. Bewick. “When you consider the higher costs and budget struggles in places like Ontario, B.C., and Alberta, it is unacceptable to take so much from them to fund other provinces’ budgets, and outrageous that this would increase by 20% over the next four years.”

Fairness Alberta used the most recent Library of Parliament breakdown of federal revenues by province to estimate the share of Equalization funding that comes from each province, and broke it down to a per capita basis. 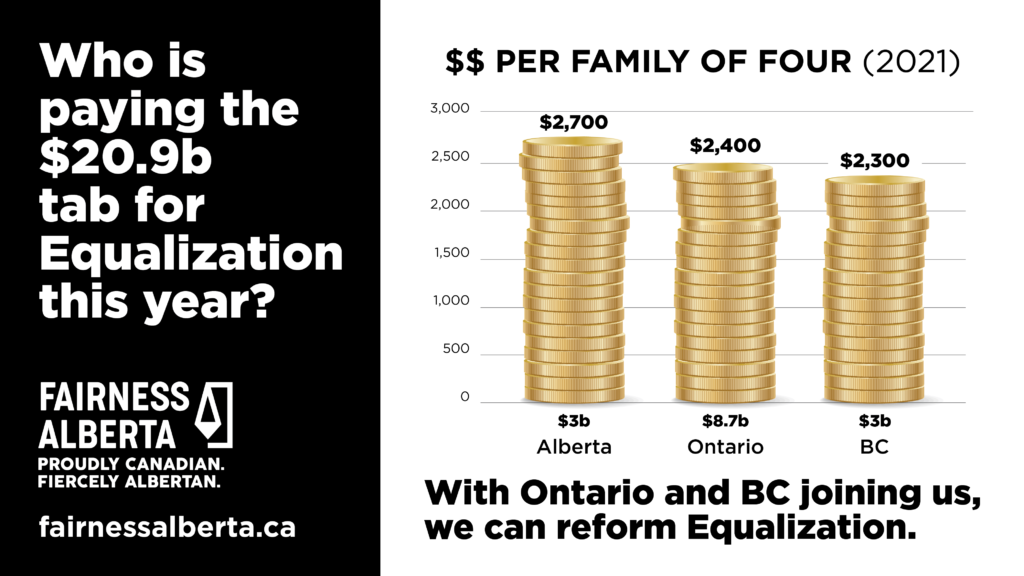 “The 67% of Canadians in the contributing provinces were struggling with their own provincial services even before COVID-19,” said Dr. Bewick.  “Given the collapse of the wealth gap between provinces, the ‘have’ provinces should get the share of Equalization that came from their taxpayers rebated until serious reforms are made.”

As Dr. Bewick outlined recently in the National Post, even a 50% rebate would mean a bump to provincial budgets of $4 billion in Ontario, and $1.5 billion being returned to B.C. and Alberta as provincial responsibilities like health care come under strain.

Fairness Alberta previously released analysis and recommendations for reforms to Equalization and the Fiscal Stabilization program, with an overview of fiscal federalism as well at fairnessalberta.ca.

Our previous releases, interviews, columns, and presentations to the House of Commons Standing Committee on Finance can be found in the NEWS section of our website. For more information on Fairness Alberta, its mandate, and future plans, please visit our website at www.fairnessalberta.ca.

Ben Eisen and Milagros Palacios recently published a report showing the “Great Convergence” in provincial fortunes since the 2015 energy downturn.  While the gap between the median ‘have’ and ‘have not’ fell from $5000 per person in 2015 to only $1600 now, Equalization payments grew by 23%. This year’s $20.9 billion windfall to 5 provinces with one-third of the population is budgeted for $25.1 billion in 4 years.