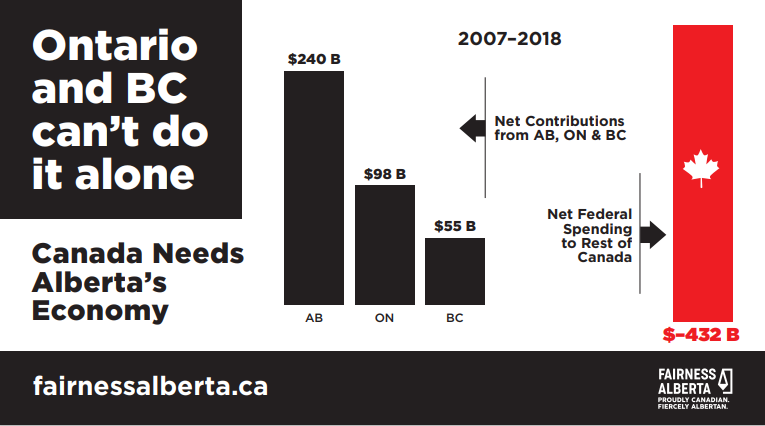 EDMONTON, AB March 29, 2021 – Today, Fairness Alberta launched a social media campaign showing that Canada needs Alberta’s economy productive again to recover from this COVID-induced financial crisis. The main graphic shows that Ontario and B.C. made significant net contributions from 2007-2018, but the net $432 billion in federal spending for the remaining provinces was only sustainable due to the $240 billion that came from Albertans.  Albertans have been carrying a heavy fiscal load in the federation: Ontario and B.C. can’t do it alone.

“Canada needs to unshackle every province’s economy to get out of this jobs and fiscal crisis, but Alberta’s potential in particular is held back by existing federal barriers as well as fears of those to come,” said Fairness Alberta Executive Director Dr. Bill Bewick.  “This billboard shows Ontario, Alberta, and B.C. have been covering a big tab for federal spending in other provinces. As Alberta’s contributions fall away because of damaging taxes and regulations that target our energy sector, Ontario and B.C. can’t cover the massive imbalance alone – that means tax hikes, program cuts, or both.”

The grassroots, non-partisan, and non-separatist group Fairness Alberta believes that highlighting the $5,000 annually per person that has gone from Albertans’ taxes to the rest of the country and explaining some of the key flaws with Equalization or Fiscal Stabilization, will not only build support for policies that support Alberta’s economy, but also open the door to reforming Equalization and other transfers.  Dr. Bewick’s recent column in the National Post “Robbing Ontario and the West to pay for the rest: exposing the unfairness of Equalization” shows why equalization payments are less justifiable than ever given the convergence of provincial fortunes since 2015, but they are scheduled to climb to $20.9 billion in the coming budget.

“With an Equalization referendum in Alberta this fall, it is important that Canadians understand why Albertans feel so unfairly treated,” said Dr. Bewick. “Folks in B.C. and Ontario should also realize that they should be joining Alberta in pressing for reforms, because it’s 2/3 of Canadians that are being treated unfairly, not just Albertans.”

Our previous releases, media coverage, and two presentations to the House of Commons Standing Committee on Finance can be found in the NEWS section of our website. For more information on Fairness Alberta, its mandate, and future plans, please visit our website at www.fairnessalberta.ca.

The Library of Parliament provides the following snapshot from 2017:
https://lop.parl.ca/staticfiles/PublicWebsite/Home/ResearchPublications/InBriefs/PDF/2017-01-e.pdf 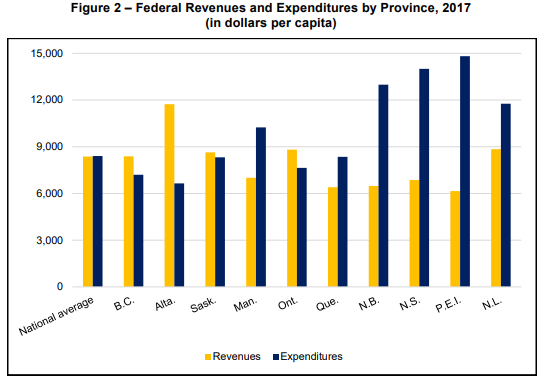